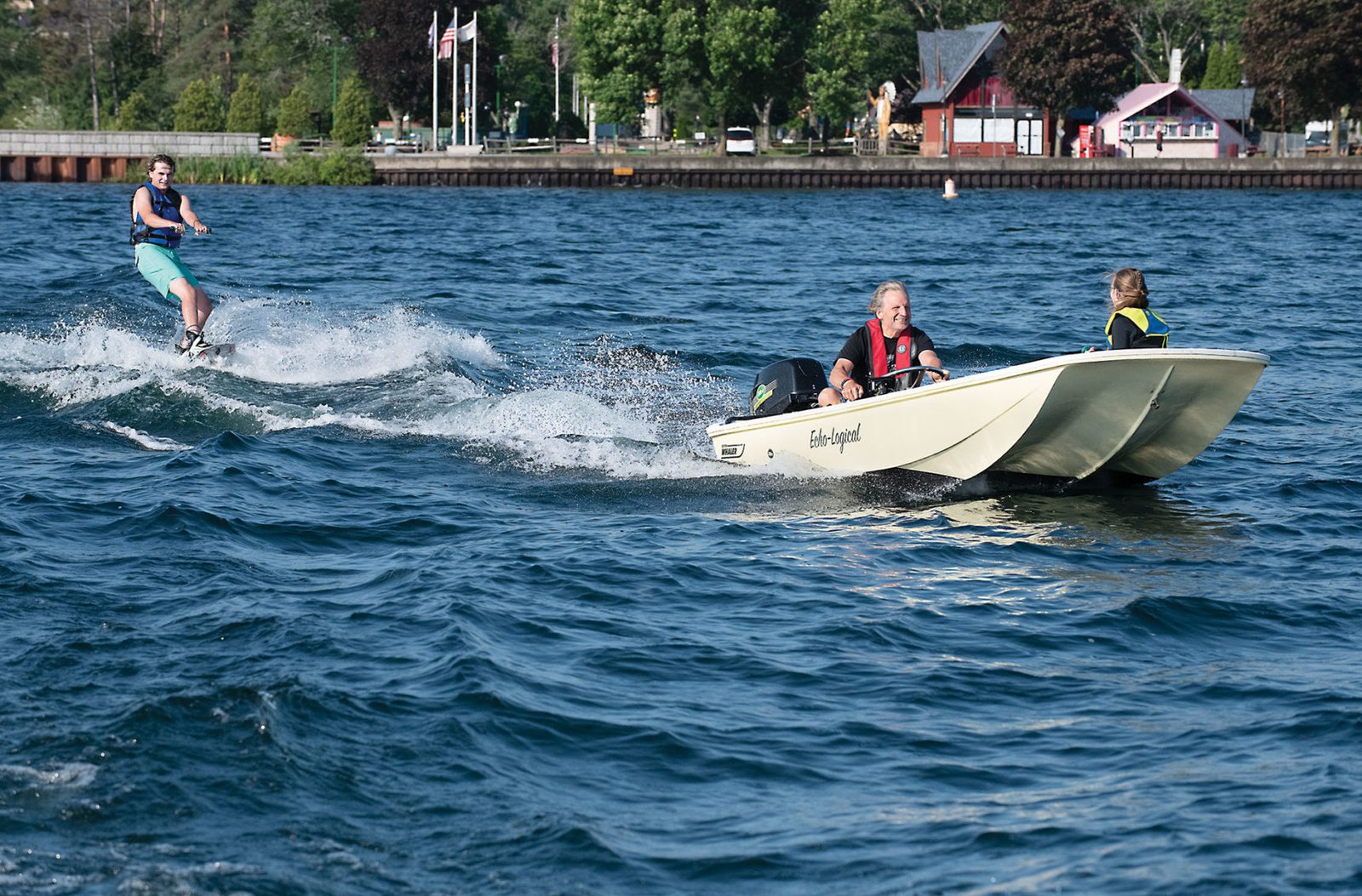 Ever wonder exactly how a gas outboard compares to an electric one? Boating Magazine did, and they put our EP-50 up against a Johnson 40 on an iconic Boston Whaler 13 Super Sport. Read the article here.

Back in 2015, I’d mused on these pages that my son, Evan, then in kindergarten, would likely own an electric-propelled boat. Now he’s in middle school and can operate a boat on his own. Has electric propulsion matured to where my light-hearted prediction might actually come true?

To find out, we repowered an iconic teenager’s first boat, a 1970 13-foot Boston Whaler Super Sport, to see how Elco’s EP-50 electric outboard and lithium batteries stack up against the boat’s 40 hp Johnson gas engine. This gave us an inside look at electric powerboats’ utility today and some clear ideas on electric boating’s future.

Electric power nearly matches gas at full throttle. Elco’s EP-50 pushes the Boston Whaler to 27.9 mph while drawing 308 amps at 104 volts DC (32 kilowatts). Our tests show that the boat’s 27 kilowatt-hours of usable battery power lasts for 51 minutes and covers 23.6 miles at that speed. Full throttle on the Johnson gas outboard averages 30.1 mph for 46 minutes, and it travels 23.9 miles from a 6-gallon tank of gasoline.

Back in 2017, we started with Elco’s 48-volt EP-30, intended to replace gas outboards in the 20 to 30 hp range. But with 296 pounds of lithium-iron-phosphate batteries providing just 12 kWh of usable battery power, the boat lacked adequate range and wouldn’t stay on plane with added people and gear. During the following few years, we trialed different Elco motors mated to ever-evolving battery technology. Each iteration proved better than the last.

In 2021, we reached our current-best 27.9 mph and 30.2-mile range. Part of that improvement came because battery-management systems and motor controllers—the brains that draw battery power and turn propellers—reached more deeply into those battery cells. We currently tap 88 percent of total battery capacity, up from just 65 percent in earlier batteries. Bigger gains also came when battery voltage increased from 108 volts when fully charged to 116 volts.

Gains by the Numbers

Battery charging also improved markedly. It took more than 18 hours to recharge the 27 kWh the boat’s current batteries utilize. Now a new 7 kW charger does the same in about four hours. We can plug into a dockside 240-volt outlet with one-quarter charge, enjoy a two-hour lunch, and head back onto the lake with three-quarters charge.

Looking at fuel consumption alone ignores another important measure: fuel used per trip. Based on our gas-engine usage, our average lake outing lasts about three hours and only uses 2 gallons of gas—the most we’ve ever used is 4 gallons for 80 minutes of actual tubing during a four-hour outing.

For the same range as 5 gallons of gas, the 27 ­kWh charged back into the Whaler’s batteries costs only $3.50. Capt. Vincent Daniello

Electric propulsion isn’t yet a full replacement for gas, but it’s getting there. Too much of the Whaler’s interior accommodates batteries, for instance, but new batteries this summer will tuck mostly beneath seats and occupy less usable interior space than the Johnson’s 6-gallon gas tank, oil reservoir and cranking battery. If next-generation batteries weigh 10 percent less per kilowatt-hour and offer 10 percent more kilowatt-hours per cubic foot of lithium, my son’s all-electric Whaler, the Echo, will noticeably exceed gas propulsion in any comparison, except for refueling time.

This leads to “use case”—the mission of the boat—when selecting propulsion. Our average lake outing, described above, falls well within the performance-charge envelope of electric power. Boaters running longer distances or spending more time tubing might possess a different viewpoint. Quick access to the gas dock, versus the ability to plug in during lunch, will likely also change the calculus.

Electric propulsion offers advantages over gas too. With the press of a switch, Elco’s Fishing and Docking mode allows just 350 engine rpm to push the Whaler just 1 mph—a user-settable feature—with maximum torque for maximum control. My son won’t be asking for gas money either. For the same range as 5 gallons of gas, the 27 kWh charged back into the Whaler’s batteries costs only $3.50 in my admittedly inexpensive municipality rate of 13 cents per kilowatt-hour. (The US national average of 19.3 cents per kilowatt-hour totals $5.21.) Maintenance savings—there are four moving parts in Elco’s outboard, and ethanol fuel is not an issue—should be substantial too.

Batteries alone won’t propel larger cruising or sport-fishing boats with big fuel tanks any time soon. The Whaler’s batteries weigh as much as 70 gallons of gas and take up the space of 45 gallons. On smaller craft, however, my son’s boating future shines brightly—and it is all battery-powered.